Skip to content
These are a few of those meals that I go to when I want to “cook” but really feel like I can just throw things in the pot and move on. They’re perfect for those busy weeknights we all experience. You can feel good about everything going on down below. I’ve cooked each of these dozens of times, and they’re always a hit with the hubs [and me].

The cream of mushroom and Worcestershire recipe was one my dad made all the time. It really brings back some great memories of sitting in our living room, TV tray in front of us, and the TV muted while we just talk for hours. I miss that big oaf.

The last recipe [excuse the title] came when Jon and I were iced in one night and had just those few ingredients to make dinner. I threw it all together and he literally said, “This is the sh*t Mexican pork!” And thus our descriptive food vocabulary was enhanced…

Adjust the meat to match the needs of your dinner – more people, more meat. The sauces should be pretty on-point though as long as you’re cooking for 6 or less.

In a baking dish or Dutch oven, spread a little of the spaghetti sauce on the bottom to make a thin layer. Liberally season the chicken with S&P on both sides and place on top of the sauce. Cover with mozzarella and then dump the rest of the sauce on top. Cover and bake for 1 hour or until chicken is cooked through.

Chicken/Pork Chops with Cream of Mushroom and Worcestershire

In a baking dish or Dutch oven, spread some of the cream of mushroom soup on the bottom to make a thin layer. Place the chicken or pork on top, then cover with the remaining cream of mushroom soup (you want a lot for the sauce). Liberally season with Worcestershire sauce and pepper – the more, the wayyyyy better. Trust me. Cover and bake for 1 hour or until chicken is cooked through.

Serve over rice or egg noodles. 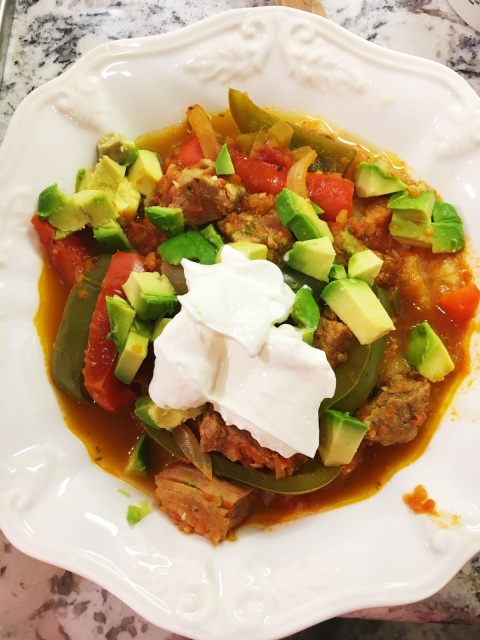 In a large skillet or Dutch oven, heat olive oil over medium-high heat until warm. Liberally season the pork with S&P. Brown the pork cubes just until the outsides are light brown; remove pork from pan. Throw in the fajita veggies and sauté until tender (about 5 minutes), stirring occasionally. Dump the pork back into the skillet and add the salsa. Reduce heat to low and stir to combine. Cover and let simmer until pork is cooked through and flavors meld (about 20 minutes).

Serve over rice with your choice of sliced green onion, cubed avocado, and sour cream.